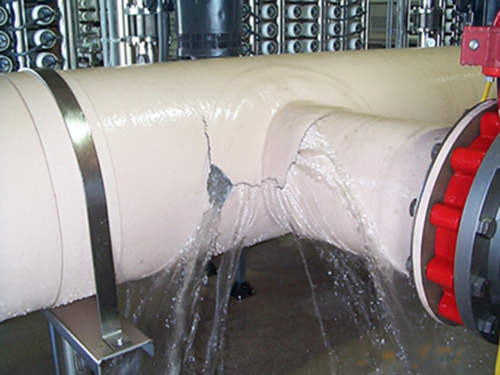 When designing FRP piping systems for corrosive services, most engineers and material specialists know to ask questions about the chemical contents and service conditions to select the best resin for the service. The engineer designs and lays out the system. Depending on a number of factors, including service conditions, schedule, and budget, the piping system may have been formally analyzed or just laid out by rules. Then the pipe is built by your Trusted FRP Manufacturer and installed by the EPC or local mechanical contractor. All is good, the pipe goes into service. Then nine months later, the pipe starts to leak at an elbow one night, or worse yet, the pipe fails and brings down the unit. What’s next, at 6am the next day, the Trusted FRP Manufacturer gets a call. “Your pipe broke, you need to come out immediately!

No one likes to make that call nor receive it, because loss of production is a big deal. It needs to be taken care of, Quickly and Permanently! Almost always, it’s the piping manufacturer that gets the blame and put under the microscope to make it right. In North America, it’s rare that the root of the problem comes from the manufactured piping and components. Generally, the piping manufacturing process is the most controlled part of the project execution. Depending on the manufacturer and materials, the failure rate of shop-made joints is generally in the range of 1% to 3%, which is pretty good and comparable to failure rates in general assembly of steel pipe. Joint failure rates are slightly higher for field assembled and welded joints for both materials.

Based on our research and project experience, we find that over 1/3 of FRP piping failures in the field are engineering related. In a notable number of those cases, poor and improper pipe supports contributed to or caused the FRP piping failure. Plant operators and Engineers can put a lot of thought and effort into selecting the right piping as well as the right piping manufacturer. Similar thought needs to go into the selection of the right pipe supports for your FRP systems. Without the right pipe supports, the pipe may be at risk from the first day. This is not a good way to start a project and sooner or later, deficient supports will reveal themselves.

Like many non-metallics, FRP is a flexible material with a lower stiffness and strength, as compared to steel. As a general rule, pipe supports for FRP are wider and more robust than those for steel pipe. Too often, supports intended for steel pipe are used on FRP pipe. That situation can cause point loads on the pipe, while still allowing an excessive amount of movement, generally leaving the pipe under-supported. Use of standard U-bolts are a frequent offender in this area. Where U-bolts are used, they need to be accompanied by a 360⁰ protective shield and they need to fit with a reasonable tolerance, say +/- 1/8” to 1/4”. For pipe sizes above NPS 10”, full clamp type supports should be used.

To provide the necessary restraint, the piping support arrangement should include a well thought out system of strategically placed guide and anchor supports. Without the proper supports and support arrangement, the great pipe that you designed and purchased may be compromised from the start. In the worst cases, the pipe’s chances for success are greatly reduced. Many of the nuisance failures that are being experienced are not due to bad pipe but rather poor supports.

Don’t leave your success to chance. Get the right supports. Request a Maverick Pipe Support Catalog and take a look at what the Right Supports look like.